As I’ve written about previously, I’m currenlty enrolled in Udacity’s Data Analyst Nano Degree program. For my most recent project, I had to create a compelling data visualization. Using d3.js, I created an interactive visualization of the U.S. Legislative Process that goes more in depth than the Schoolhouse Rock! video that most people know.

See it in action. 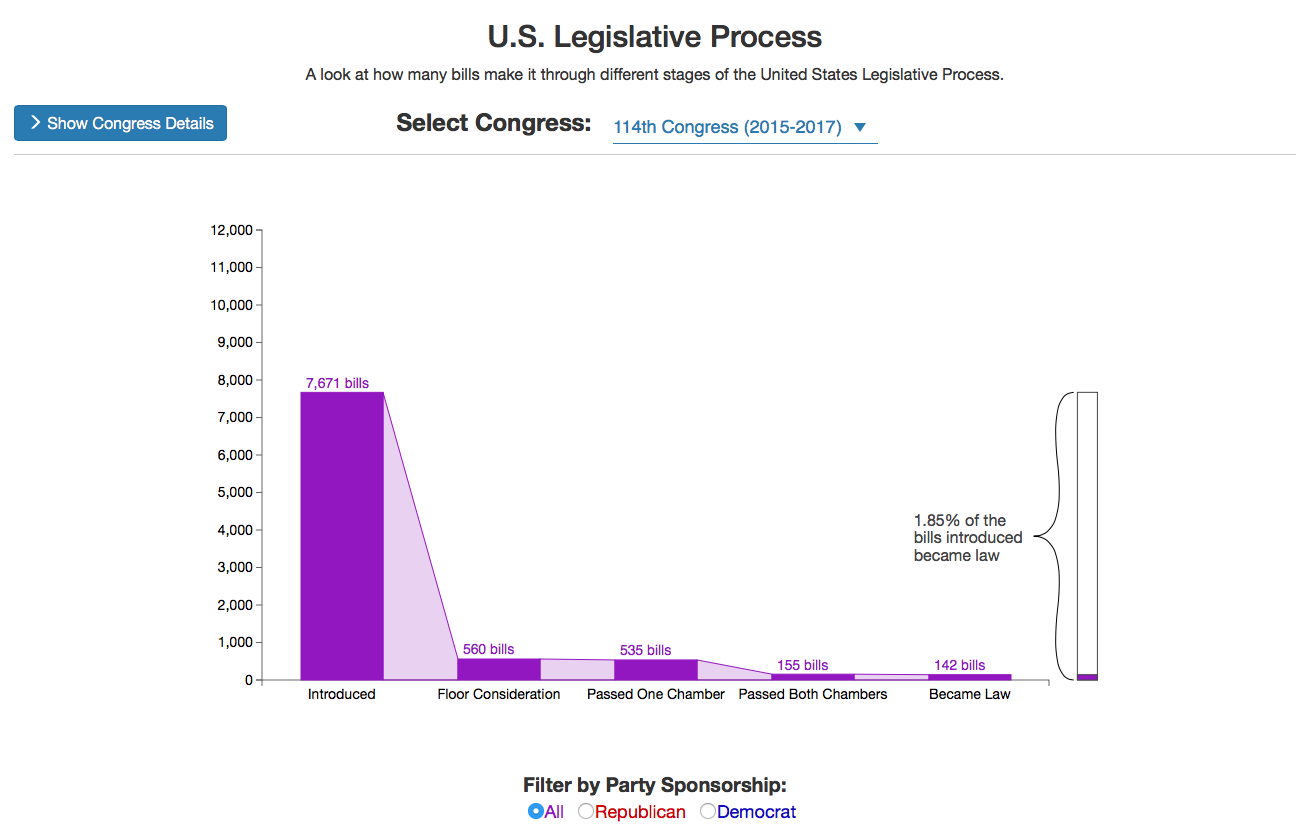 There is a lot of friction in this process that keeps the vast majority of bills from getting through. I hope that upon seeing how many bills fail, the viewer will be curious to find out the ways in which bills fail and will continue learning about the process from other sources to understand why so many bills fail.

I went through several design iterations before settling on the general layout of the visualization.

My first idea was to lay out the different governing entities spatially, and show the progression of bills as they pass through those entities. Ultimately, I felt like this wasn’t the most straightforward way to tell the two data stories above, and I also found another visualization that already does a similar thing. 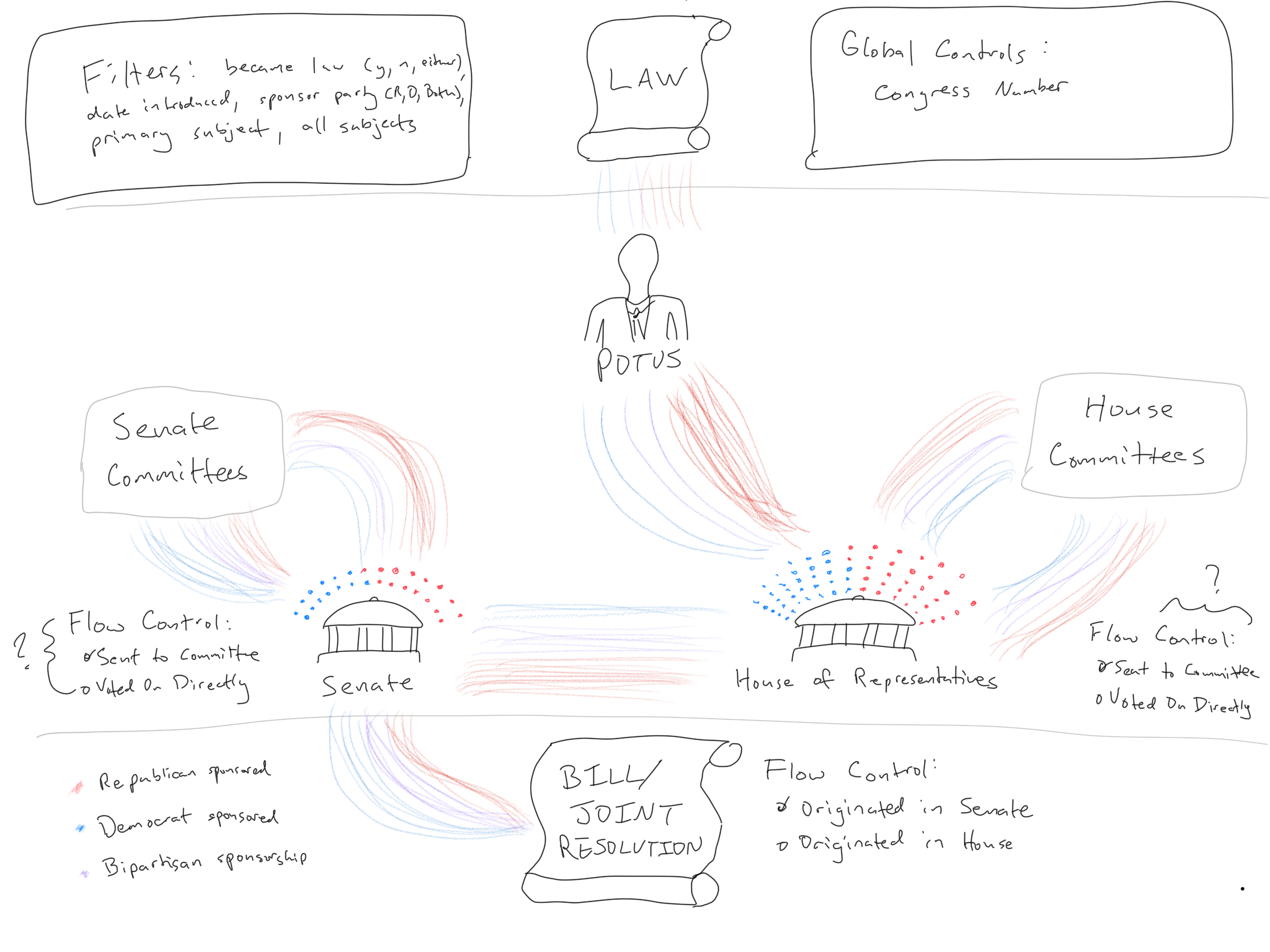 I then switched to a new layout that showed a histogram of bills at different stages of the legislative process. I also added some details about the current Congress to provide context for the viewer. 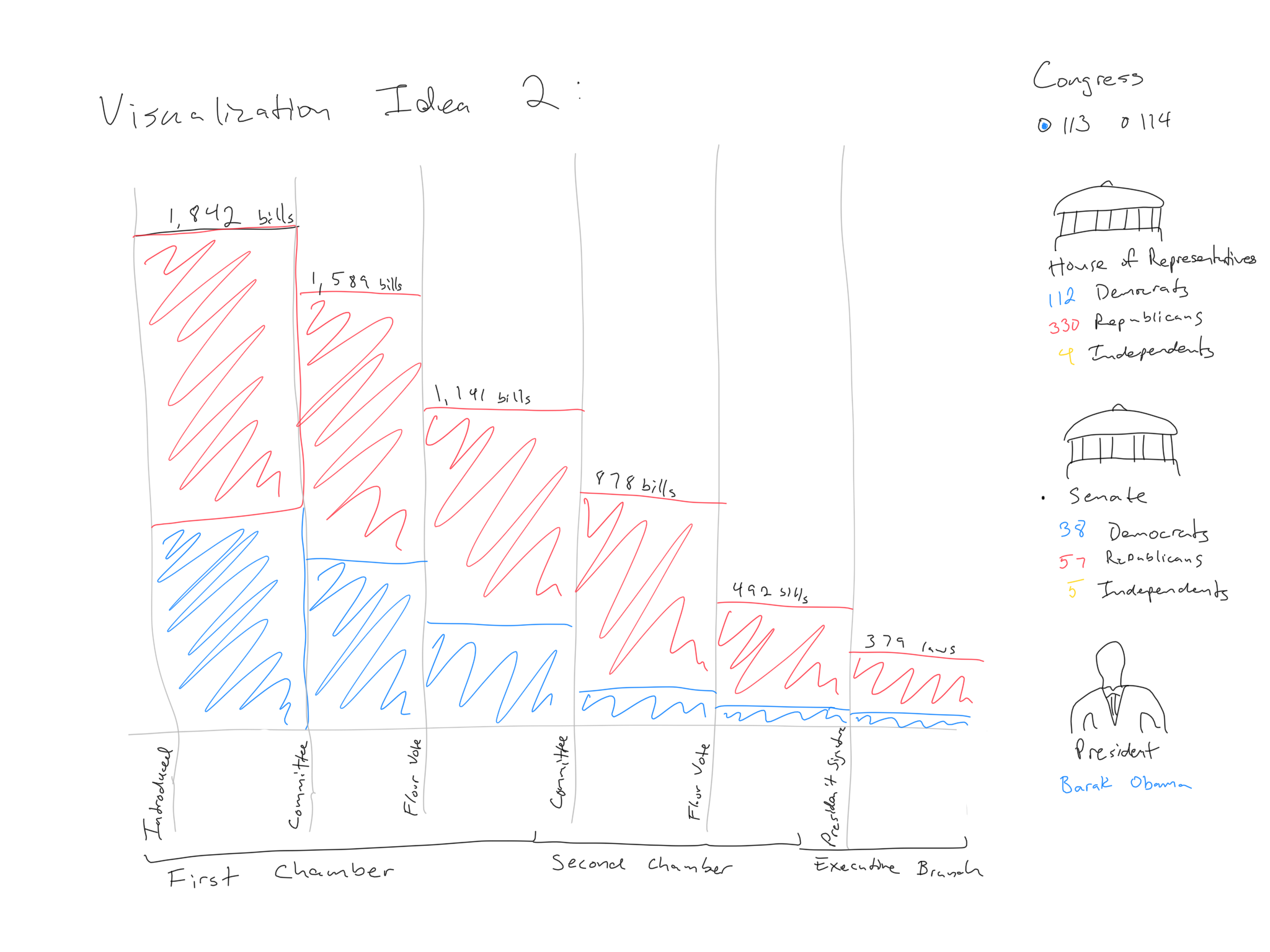 The next iteration only had minor changes. I moved the Congress detail to the left and separated the bars from each other, connecting them with a slope line to put more emphasis on the drop in the number of bills at each stage. 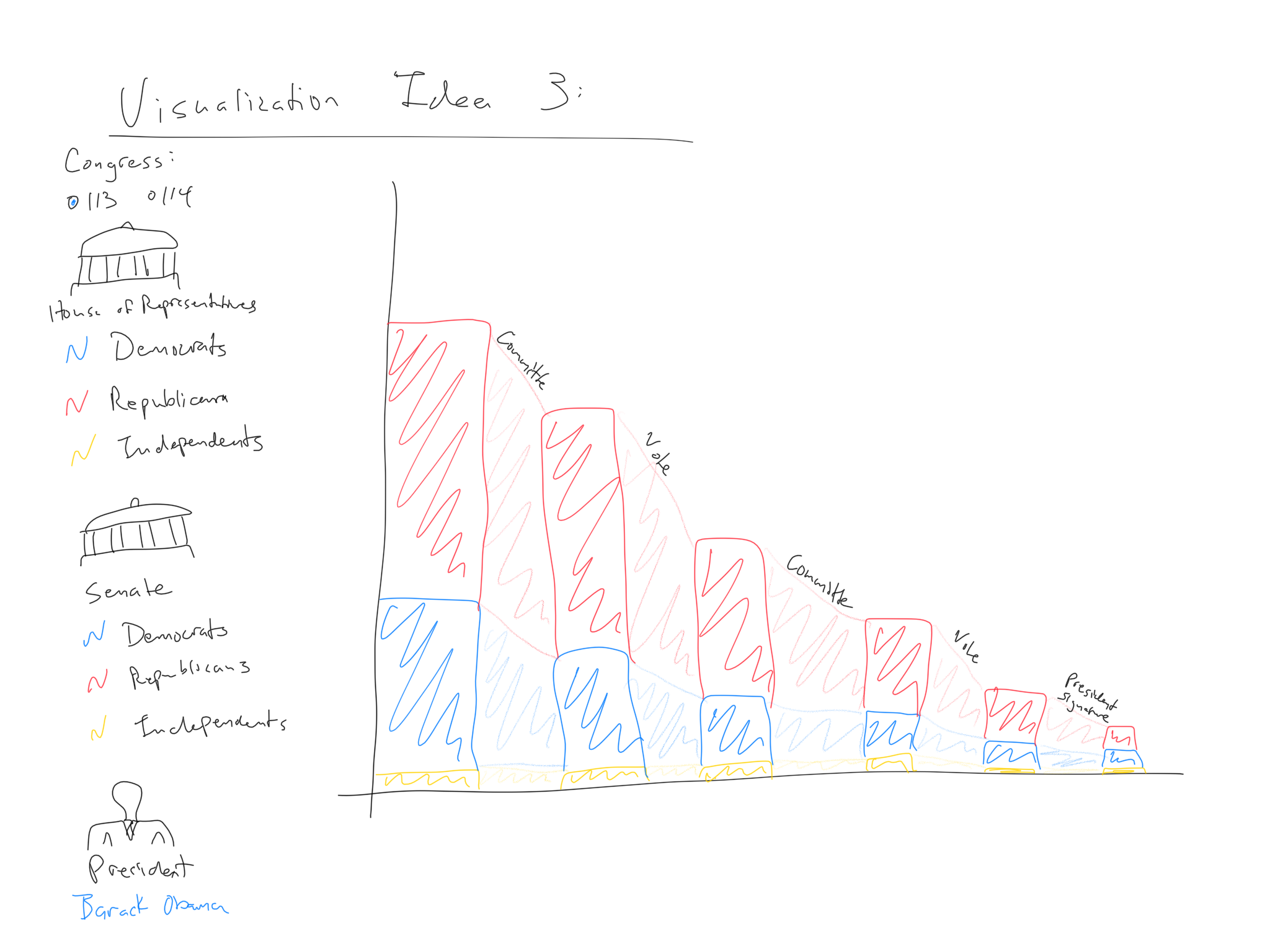 Then, to show the changes within each party better, I unstacked the bar chart, splitting it into 3 charts. This helps the viewer see how many bills failed at each stage by party, since the bill counts are encoded by length and y position instead of just length, like it is in the stacked bar chart of Stage 3. 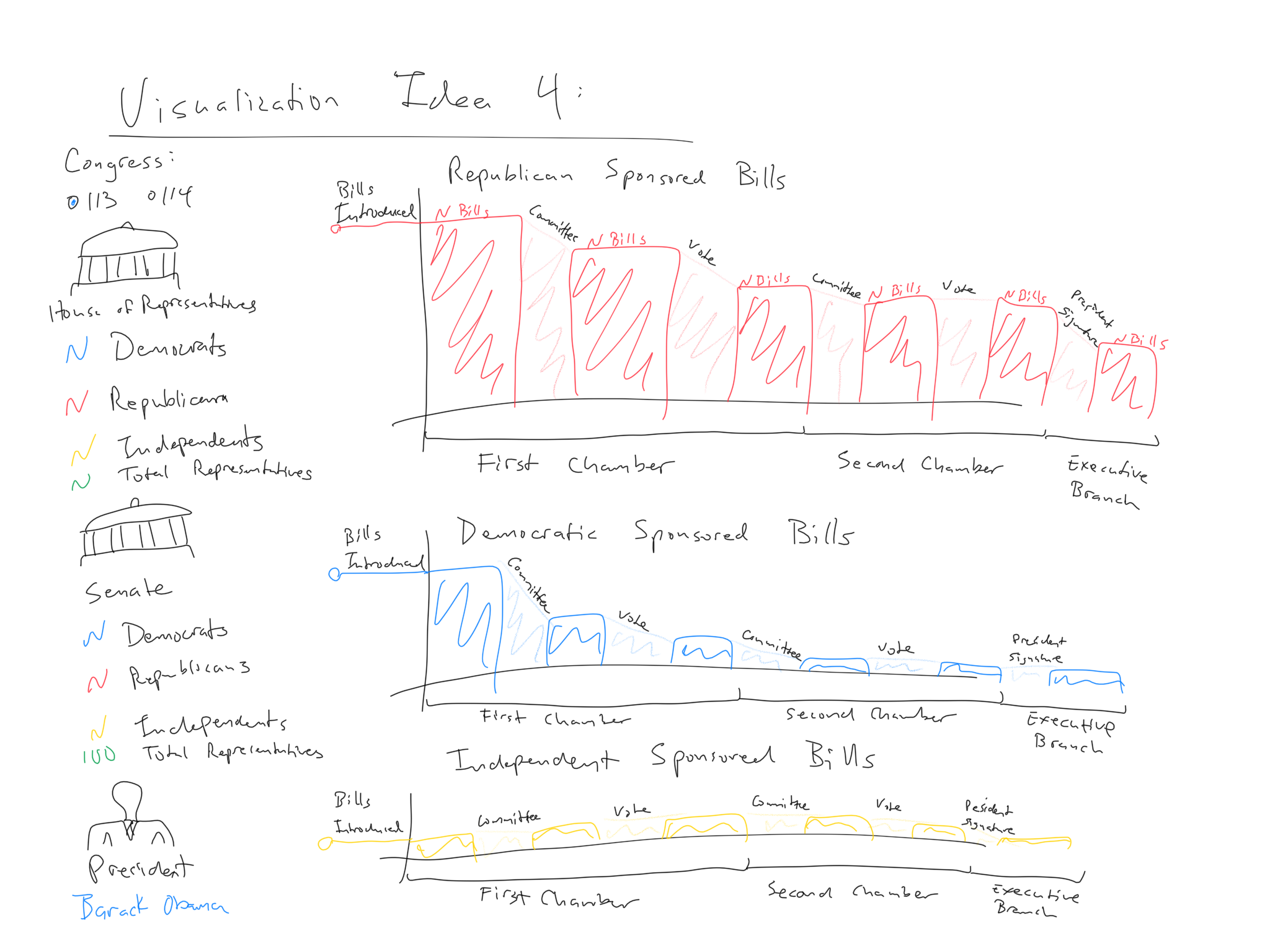 The main change I made at this stage of my ideation was to allow the viewer to control which party was displayed, so that only one chart has to be displayed at a time. This reduces visual clutter and allows the chart to be bigger. 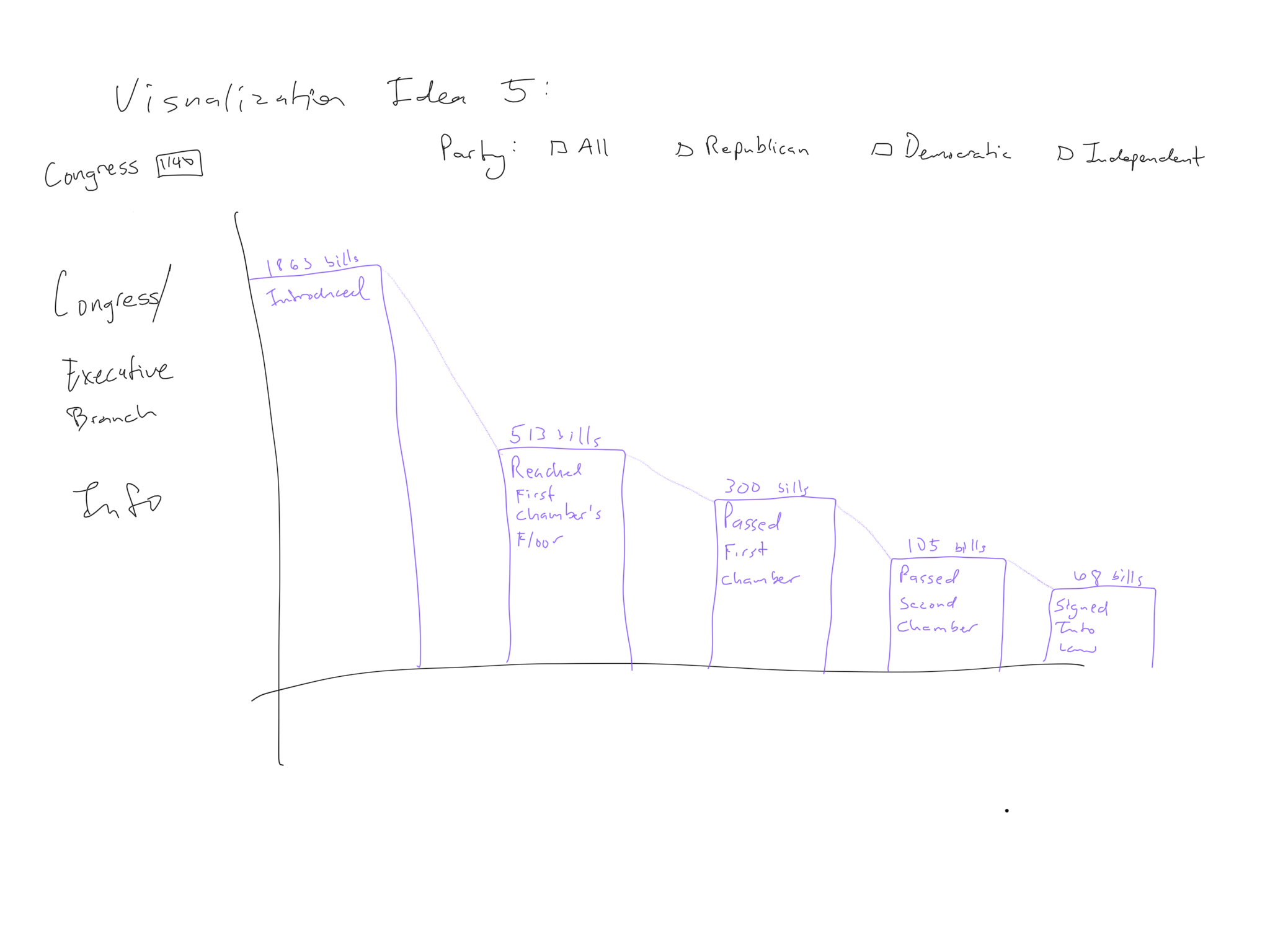 After implementing the visualization from Stage 5, I showed my interactive visualization to 3 people to get their feedback. Then, I received feedback from my reviewer at Udacity, which I didn’t implement, but it gave me great ideas for future visualizations.

Even though my project met all of the requirements, my reviewer gave me some further feedback to consider, which I found very helpful.

One suggestion may be adding more broad perspective, like visualizing all the Congresses in one graph (using a percentage of passed bills) and trying to explain (or connect to some historical reasons) different performance. Such line can also serve as control element like a slider for very fast switching between different years and quick comparisons.

In addition to previous section suggestion, consider showing both Republicans and Democrats at the same chart – just draw one part above the x-axis and second below. It will allow to eliminate switch and show all the data at the same time and also highlight differences when one or another party dominates.

I think both of these pieces of advice are spot on, and I will consider the general ideas in future visualizations.